More News on COVID-19 and Hydroxychloroquine

The Veterans Administration recently shared the results of a nationwide, retrospective analysis of the outcomes of patients hospitalized with COVID-19 from March 9 to April 11.  They investigated differential outcomes in patients treated with hydroxycholoroquine or combination therapy (hydroxychloroquine + azithromycin) and compared it to those who did not receive either of those interventions.  385 patients were identified, but the 17 females were excluded from further analysis due to small sample size.  368 patients were evaluated : Hydroxychloroquine alone (97) versus hydroxychloroquine + azithromycin (113) versus none (158).  Competing risk hazard regression adjusting for  clinical characteristics via propensity scores was utilized.  Two primary outcomes were death and the need for mechanical ventilation.

Baseline and demographic characteristics  were comparable over the three groups. The authors admit that the HC treated group, with or without Azithromycin, was a “sicker” group (e.g lymphopenia overall,  and mortality would thus be expected to be higher in this group.   However, this increased risk of mortality persisted for the HC only treated group after being adjusted for propensity of  being treated with the drug. 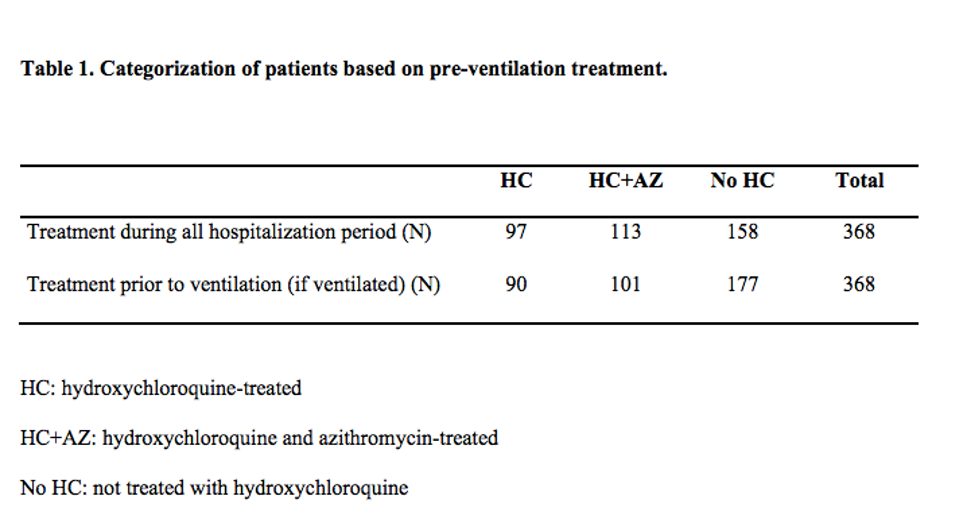 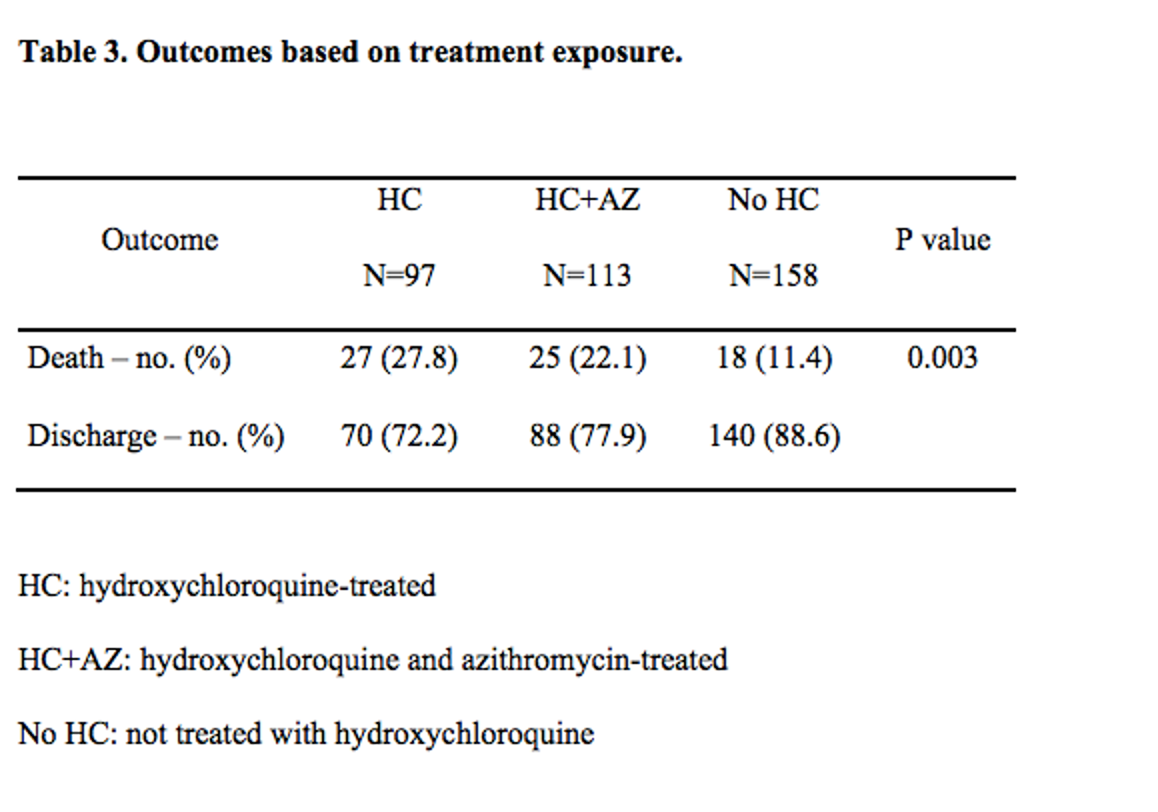 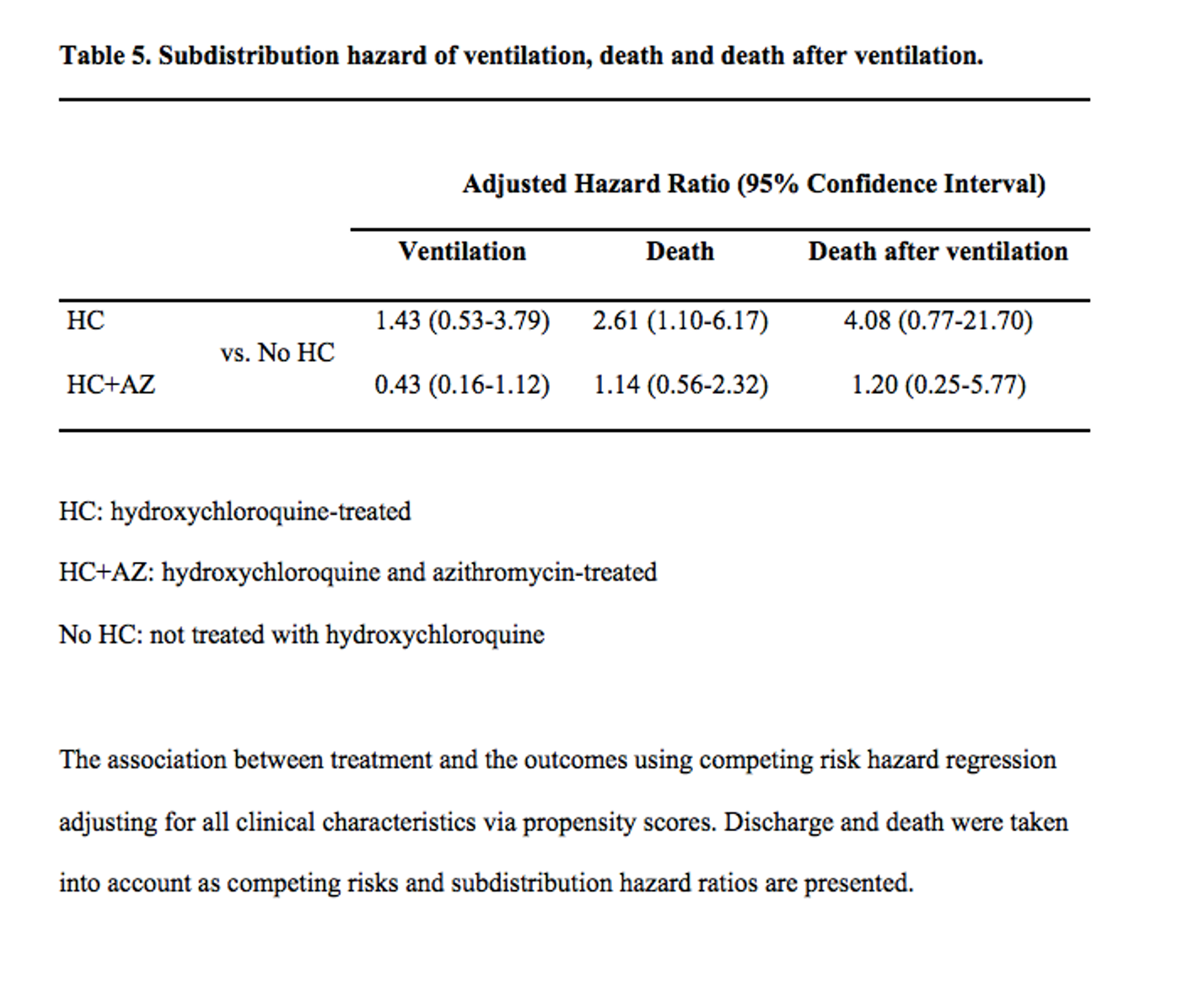 Commentary: Sheila Fallon-Friedlander, MD
There are some strengths to this study;  it was a nationwide study in an integrated health care system utilizing a standardized EMR system. Adjustments were made for potential confounding factors among the three groups.  However it is limited by its small size , retrospective nature and lack of randomization of treatment.  The median age of the patient was 65, and all were male; thus it probably does not give us significant information regarding the younger and female population.  We are unclear when the drugs were utilized; if drug intervention was not utilized early in the illness, it might have decreased the probability of efficacy  from either drug.

Despite these shortcomings, its results remind us that we do not yet have strong evidence that hydroxychloroquine therapy improves outcome in patients with Covid-19.  Hydroxychloroquine therapy, with or without azithromycin, did not improve mortality nor decrease the need for ventilation in these hospitalized patients.  In addition, HCQ alone increased mortality. The latter result may have been related to HCQ toxicities, as cardiac arrythmias in particular have been noted in other studies utilizing HCQ.

Will SARS-CoV-2 Become a Seasonal Virus? How to Mitigate Its Impact ?World Health Organization Scientific Brief regarding “Immunity Passports”...
Scroll to top
Loading...