In early August of 2007, a 47 year-old patient presented to her PCP with concerns of an atypical appearing lesion on the left lower leg. She was referred to a dermatologist. On August 14th, the biopsy showed 0.97 mm, Level IV, SSM, four mitoses, and non-ulcerated. A wide excision was performed and there was no residual melanoma and no further surgery was recommended. ‎In April of 2009, the patient noted a small cutaneous mass in scar line on the lower left leg.  In June, the patient underwent wide local excision and sentinel lymph node biopsy. The results showed two out of three positive sentinel nodes, the largest metastasis was 4mm; and (+) extracapsular extension.  On July 29, 2009, she underwent (L) inguinal LND and sartorius muscle transposition flap.  Zero out of seven nodes (including Cloquet’s node) were negative.   There were a total of two out of ten positive nodes. She received adjuvant interferon. Unfortunately, two years later, a PET-CT showed an increase in the number of FDG avid lesions in the leg and inguinal and pelvic adenopathy. She’s now considering systemic treatment.

What specimen should be used for determining the patient’s BRAF status?

The general guidelines are to take the most recent evidence of advanced disease. Concordance is very important. Do you know that the lesion in the lung is identical to the lesion that presented five years ago according to its genotype?

SNaPshot panel reveals BRAF WT, NRAS and Q61R mutation. On March 21, 2011, she received high-dose IL-2 therapy. In June of 2011, the PET/CT revealed increased FDG uptake in pre-existing left leg subcutaneous nodules and an increase in size as well as FDG uptake in bilateral inguinal lymph nodes. In August, she enrolled in a clinical trial of bevacizumab and ipilimumab. A CT C/A/P performed in April of 2012 revealed an increase in the size of the largest lung mestastasis (15mm to 20mm) and a new 1.6cm liver metastasis. MRI of the brain was negative. June 8, 2012 was her first day on 10-017, a phase 1 study of a CDK4/6 dual inhibitor. By the end of the July, CT C/A/P revealed disease progression in the lung and a new, solitary brain metastatsis measuring 4mm; the disease burden was otherwise relatively stable. In August, she underwent stereotactic radiation to the solitary, 4mm brain mestastasis. October 23, 2012 was cycle one/day one of BKM120/MEK162 trial # 11-308. She remained stable for four months. 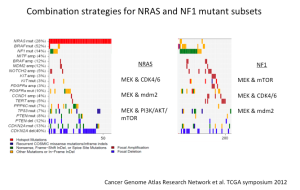 One of our greatest challenges is that NRAS is not something that we can target with a drug. Indirect strategies; however, may work. 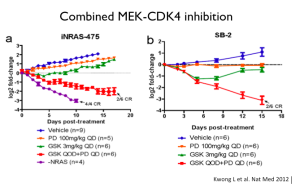 MEK inhibitors in NRAS-mutant melanoma have some efficacy. It’s not comparable to what a MEK inhibitor or BRAF inhibitor can do in BRAF-mutant cancer, but it is certainly a suggestion that may perturb these tumors.