It is very important that we correctly diagnose onychomycosis. For the first time in over twenty years, we are able to use techniques other than light microscopy and culture. Molecular biology can be used to accurately diagnose multiple organisms that may cause onychomycosis. Dr Gupta has learned, through his lab, that often we may have mixed infections of two dermatophytes, a dermatophyte and a non-dermatophyte, or two non-dermatophytes. PCR analysis is more sensitive than culture, so it has a greater ability to identify mixed infections.

Onychomycosis can be managed with topical therapy, oral therapy, and/or devices, i.e., lasers. In terms of oral therapy, terbinafine is the gold standard. Itraconazole is also indicated for the treatment of onychomycosis and fluconazole can be used off-label.

There are two new oral drugs in development—posaconazole and albaconazole. 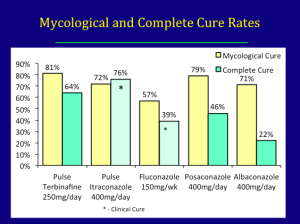 It is important to recognize that onychomycosis is a difficult disease to treat, so you should consider the fact that you may need booster therapy or extra treatment around six to nine months from the start of therapy. For example, with terbinafine, giving 250mg per day for four weeks and repeating that at nine months and twelve months.

Efinaconazole, a triazole, which was just approved in Canada, has a low MIC for dermatophytes, yeasts and non-dermatophyte molds and relatively low keratin binding to facilitate transungual penetration. With regards to mycological cure and complete cure, data for efinaconazole demonstrated 54 percent and 17 percent cure rates, respectively versus 32 percent and seven percent, respectively with ciclopirox.

Tavaborole, a broad-spectrum benzoxaborole antifungal, has a low molecular weight and low lipophilicity facilitating penetration into the nail plate. At week 52, tavaborole demonstrated a 34 percent mycological cure and an eight percent complete cure as compared to 32 percent and seven percent, respectively with ciclopirox.

We need to recognize that there are differences in the severity and population of participants between the studies looking at the efficacy of efinaconazole and tavaborole; therefore, precluding a head-to-head comparison.

Differences Between Efinaconazole and Tavaborole in Pivotal Phase III Studies

Luliconazole is a topical imidazole approved in the United States for the treatment of tinea pedis. There are phase II/III trials currently underway studying its efficacy for onychomycosis.

There is insufficient data to determine if lasers are fungicidal in onychomycosis, especially as the precise mechanism of action remains unclear. The most likely effect is a selective photothermal effect, although we cannot rule out a photoacoustic, photochemical, or photomechanical effect. Keep in mind that the fungus has to be heated to at least fifty degrees centigrade for at least ten to fifteen minutes or 60 degrees (or even 70 degrees) for shorter periods of time. The aim of selective photothermolysis is the create very high increases in temperature in the fungi while the water content in the dermis and the blood vessels surrounding the nail bed allows for the dissipation of heat to prevent pain and tissue necrosis. The pulse format of the laser is critical for ensuring that heat remains confined and elevated in the fungi, while providing sufficient time for the surrounding tissue to dissipate the heat,

In the United States, the division of the FDA that approves lasers is different from the division that approves anti-fungal treatments. Lasers are indicated for use for the temporary increase of clear nail in patients with onychomycosis—this is quite a different approval as it is a cosmetic approval that does not look for mycological or complete cure. These lasers have not been subject to the same stringent standards that we expect of topical and oral therapies. There have been a number of open, single assignment clinical trials conducted using laser systems; however, randomized, controlled studies are needed to determine if laser is an effective treatment

Prevention of Recurrence and Reinfection

Recurrence rates can be anywhere from 11 to 35 percent or even higher. Remember that fungi can be transmitted to uncontaminated clothing in the wash. It is important to remind patients to wash their clothes and shoes in hot water (greater than 60 degrees) for more than 45 minutes. Ozone can be used to sanitize shoes and sports equipment of dermatophytes, yeasts, and non-dermatophyte molds. Ultraviolet light can also be used to sanitize shoes and reduce fungal burden.

Factors Contributing to Recurrence and Reinfection

The fungus that causes onychomycosis is not just dermatophytes or non-dermatophytes, but mixed infections as well. We have also shown that T. rubrum is not just T. rubum; there are minute-based pair differences that produce different strain types. We have found that strain type switching may contribute to the failure of oral terbinafine.

In summary, terbinafine remains the gold standard for treating onychomycosis. Both continuous and pulsed regimens are beneficial with an optimal pulse regimen of four weeks on, four weeks off and four weeks on. We have found that using this strategy, taking into account the pharmacokinetics of the drug, we can achieve fairly high cure rates. Itraconazole 200mg melt extrusion tablet may lead to better compliance rates versus two 100mg capsules. Don’t forget about booster therapy!

Fluconazole, while off-label in the United States, can be used at 150mg/week for longer than six weeks is also effective. The efficacy for posanoazole and albaconazole is similar, but not superior, to that of terbinafine.

We also have new topicals for onychomycosis—efinaconazole and tavaborole. It remains to see whether or not they will be used as monotherapy or in combination. Perhaps they could be effectively used in patients who fail oral terbinafine. They may also be used to prevent early recurrence of onychomycosis. There are a lot of potentials for the topical therapy.

As dermatologists, we use lasers for many things. We still don’t know enough about the use of lasers for the therapeutic cure of onychomycosis.