The field of psoriasis, especially with regards to systemic therapy, is ever evolving. In this presentation, Dr Craig Leonardi discusses what’s new as far as treatment for psoriasis and what we need to know for this first quarter of 2015.

Inventory of Biologics with Utility in Psoriasis

As we all know, the T-cell inhibitors, alefacept and efalizumab, once both approved for the treatment of psoriasis, were withdrawn from the market due to lack of use and serious infections (PML), respectively. Our attention has shifted to managing cytokines rather than affecting T-cells directly. This approach has led us to more successful research. 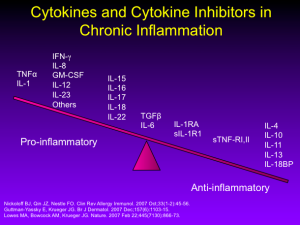 Our second-generation biologics (adalimumab, etanercept, infliximab, and certolizumab) all target TNF-alpha. Ustekinumab, an IL-12/23 antagonist is a third generation biologic with which most of us are familiar.

There are a growing number of new and emerging biologics for the treatment of psoriasis. Guselkumab, tildrakizumab, and another therapy under development by Boehringer-Ingelheim all target IL-23. Secukinumab (approved February 2015), ixekizumab, and brodalumab target IL-17.

CZP is a pegylated Fab fragment that was initially approved for the treatment of Crohn’s disease in 2008. In 2009, it was approved for the treatment of rheumatoid arthritis and in 2013, CZP received approval for both active psoriatic arthritis and ankylosing spondylitis. The phase II psoriasis trial of 176 patients demonstrated positive efficacy results with no unexpected safety issues. Patients were randomized to CZP 200 mg queow, CZP 400 mg qmonth, or placebo.

Several years later, the company started a phase III program in psoriasis. Dr Leonardi feels that if you have patients with significant psoriatic arthritis and you are running out of TNF antagonists, you may want to consider CZP.

Remember that ustekinumab is an antibody that targets the p40 subunit. When it does that, it hits both IL-12 and IL-23 because the p40 subunit is shared. Targeting IL-12 and IL-23, causes a rich set of downstream effects, including down-regulation of Th1, Th17, and Th22 immunocytes. We will also see a decrease in the production of cytokines in the skin, especially IL-17a, IL-17f, and TNFα.

These features are suggestive of the psoriasis phenotype, so this is a good approach to targeted therapy.

What about the newer drugs, guselkumab, tildrakizumab, and BI-655066 that selectively block IL-23? These drugs selectively target the IL-23 p19 subunit, which is not shared with IL-12, thereby allowing them to function as IL-23 selective monoclonal antibodies.

The phase II trial demonstrates that this novel anti-IL-23 p19 subunit monoclonal antibodiy is a significant drug. Several doses were used and compared not only to placebo, but also to adalimumab. At week 12, four of the doses showed a PASI 75 between 75% and 81% indicating that this is a high performance drug. Regarding adverse events, three serious infections, one malignancy and three MACE events were reported. There were no anaphylactic reactions or serum sickness-like reactions. (Callis Duffin K., et al. AAD 2014. P8353)

Tildrakizumab is a novel anti-IL23p19 monoclonal antibody. Unlike usetekinumab, it blocks IL23 and not IL12. In phase 2 trials, at week 16, 76.2% of patients achieved a PASI-75 and 52.2% of patients achieved a PASI-90. All doses (5 mg, 25 mg, 100 mg, 200 mg) were statistically significant at PASI-75 compared to placebo. Common adverse events included nasopharyngitis and URTI. Overall, the drug appears to be generally safe and well tolerated. (Thaci D P1537 EADV 2013)

BI 655066 is a novel anti-IL23p19 monoclonal antibody given as a single subcutaneous injection. The phase 2 study results demonstrated a PASI-75 in 87% of patients and PASI-90 in 58% of patients at week 12. Thirty-three percent of patients remained clear after 66 weeks. (Krueger J. EADV 2014). This is a very early phase 2 study, and lot more work will likely be done.

Secukinumab was approved in the United States for the treatment of psoriasis on January 21, 2015. Langely and colleagues published what Dr Leonardi refers to as “masterful” manuscript in the New England Journal of Medicine in 2014. As a clinician, if you would like to completely understand secukinumab, this publication may be extremely beneficial to you. (Langley R, et al. N Engl J Med. 2014;371:326-338.)

Secukinumab (300 mg and 150 mg) demonstrates a much faster response rate in achieving a (PASI-50), in 3 weeks and 4 weeks respectively, when compared to that achieved by etanercept in 7 weeks. Like many physicians, Dr Leonardi sees his patients at one-month into the experience. With a drug like secukinumab, you will understand at that visit whether or not it is going to achieve the results that we expect. We can see a PASI-75 in over 80% of patients at week 12 and continuing through week 52 with this drug.

There are no significant safety issues associated with secukinumab. One of the fascinating things that we have seen is the FDA’s independent analysis of this drug. 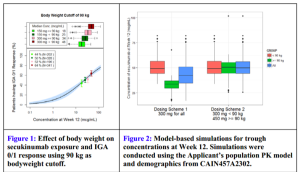 Figure 1 (above) is plotting clear/almost-clear response versus serum concentration of drug. The FDA is modeling where they expect/what percent of patients will achieve clear/almost-clear based on concentrations of the drug. They have four real data points on the graph and the rest is a dosing model. This is the first time that Dr Leonardi has seen the FDA predict a response based on serum concentration. This gives us a more informed way of using the medicines that we prescribe, especially the more expensive ones. In figure 2 (above), the FDA was looking at the dosing on the left side and suggested that patients would be better served, the heavier weighted patients, if they went with the 450 mg dose—a dose that had never been tested. The FDA was so unconcerned with the safety profile of secukinumab that they urged the company to run the drug harder than they already have. This reflects a dramatic shift in the FDA as far as the approach to this drug, psoriasis, and the severity of the disease.

The labeling for secukinumab is also interesting. Remember, they are not so much concerned with safety with this drug. “Recommended dose is 300 mg by subcutaneous injection at Weeks 0, 1,2,3, and 4 followed by 300 mg every 4 Weeks. For some patients, a dose of 150 mg may be acceptable.” Some feel that the insurance industry may challenge the 300 mg dosing. With these therapies, maybe they are saying for whatever reason you have, you may want to alter the dose. Dr Leonardi feels that this is good because we should be able to use expensive resources in ways that are creative and best for our patients, our specialty, and for society.

Phase 3 data for this drug will likely be available in March 2015. Phase 2 data have shown that this is a very high-performance drug with a high percentage of patients achieving PASI-90. The drug is exceedingly well tolerated with no serious adverse events reported. (N Engl J Med 2012;366:1190-9) The scientists at Eli Lilly looked at the predictive value of PASI-50 for predicting PASI-75 response. This analysis showed that there was good overall sensitivity (83%), specificity (87%), PPV (90%), and NPV (77%). This is showing that if your patient, treated with ixekizumab, achieved PASI-50 response they would go on to achieve PASI-75 by week 12. This is important—think about when you might be seeing your patient for the first time.

This class of drugs shows significant clearing and increased patient and physician satisfaction. 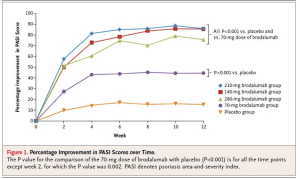 This drug was again well tolerated and demonstrates a favorable safety profile.

Secukinumab released its phase 3 PsA results at the American College of Rheumatology in November 2014. In this study, the patients received IV secukinumab for the first three doses and then changed over to subcutaneous secukinumab. Using this scheme, we can see ACR 50 response rates similar to those of the TNF antagonists. (See graph below) 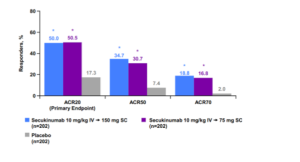 Again, the IL-17 antagonists are finding their way in rheumatology as well. 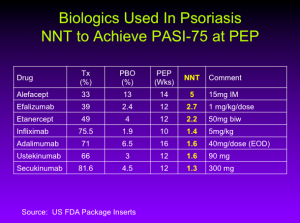 You can see that we’re starting to cluster as we get to the bottom, whether you’re thinking about PASI numbers or NNT numbers. It really is quite remarkable. According to Dr. Leonardi, in the case of ixekizumab, the NNT is 1.1 meaning that if you treat 11 patients with Ixekizumab, 10 will achieve a PASI-75.

Do we really need biomarkers when clinical response is profound and fast?

We have been talking about biomarkers for years, but it’s quite likely that when a patient comes back after four weeks, we will have a good understanding of how he/she is going to respond to the various classes of therapy.

Tofacitinib, an inhibitor of JAK 1 and 3, was recently approved at 5 mg BID for the treatment of rheumatoid arthritis. The data for psoriasis is positive, in that it is highly efficacious and is relative well tolerated. (Papp KA, Menter A, Strober B, et al. Efficacy and safety of tofacitinib, an oral Janus kinase inhibitor, in the treatment of psoriasis: a Phase 2b randomized placebo-controlled dose-ranging study. Br J Dermatol (2012) 167, pp 668–677)  Serious adverse events included atrial fibrillation, pyelonephritis, and urosepsis. Mild decreases in HgB levels were greater in the 15 mg BID group and transient decreases in PMNs were seen in the 5 mg and 15 mg BID groups. There were also dose-related increases in HDL and LDL. (Harness J, et al. EADV 2010: P558)

There were issues in the rheumatoid arthritis program that will be brought to attention despite the fact that RA and psoriasis are two completely different immunologic disorders. The FDA commented that the risk of malignancy appeared to increase in a dose and time dependent fashion and the data also suggest tofacitinib treatment is associated with an increased risk of serious infections, including opportunistic infection.

The traditional psoriasis treatment paradigm was that of a stepwise progression, i.e., patients must fail the previous “step” of therapy before initiating more “aggressive” therapy. In today’s dermatology setting, psoriasis treatment is not stepwise. Choice of therapy depends on individual patient characteristics. We have a rich set of biologic agents and five more coming down the pipeline. As dermatologists, it’s time that we “rethink our goals.”