At Maui Derm 2015, Dr Kavanaugh, a Rheumatologist at the University of California, San Diego, presented some of the important developments in psoriatic arthritis (PsA) from 2014.

The diagnosis of PsA remains a challenge. Data from the Multinational Assessment of Psoriasis and Psoriatic Arthritis (MAPP) survey looked at 3,426 patients with psoriasis and/or PsA. Among those patients, 712 (20.8%) had PsA. (Lebwohl MG, et al. J Am Acad Dermatol. 2014;70:871-881.) According to the survey, the average was five years between PsA signs and symptoms and diagnosis. What symptoms do we need to recognize in these patients? In this survey, symptoms included:

Approximately 16% of these patients did not see a healthcare provider in the past year, and most of the PsA patients in the survey were not treated by a rheumatologist. These results imply a huge unmet need as many psoriatic patients are going untreated. We may need to think about the realization of PsA at the primary care level so that these patients can be referred to rheumatologists or dermatologists for appropriate treatment.

Among those with PsA in the MAPP survey, the majority of patients were not on therapy (28%) or on topical therapy (31%). Of the patients surveyed who had ever used biologic therapy (including those with psoriasis or PsA), 45% had discontinued treatment.

The literature suggests that only half of patients with PsA are diagnosed, and only half of the diagnosed patients receive drug treatment. This is something that we can and must do better.

In rheumatology, Dr Kavanaugh comments that we are still fighting the historical viewpoint that PsA is not as bad as rheumatoid arthritis (RA). But, if you take people who have polyarticular disease, you will see that they are every bit as severe as the RA patients.

It has been shown that a delay in the diagnosis of PsA correlates with worse outcomes for patients. In a study of 283 patients fulfilling CASPAR criteria from a single Irish center, the mean lag from symptom onset to seeing a rheumatologist was about one year. This study demonstrated that if the patient didn’t get to the rheumatologist within 6 months, he/she had 4 times the chance of already having joint damage. Even a short delay in diagnosis is associated with increased morbidity. (Haroon M, et al. Ann Rheum Dis Epub 27 Feb 2014)

Diagnosis of PsA can be a bit tricky. Among the patients with psoriasis, who are the 25%-30% of patients who have PsA? Because skin symptoms often precede joint symptoms, dermatologists play an important role in the early diagnosis of PsA.

TNF inhibitors have dramatically changed our overall approach to the management of PsA. They remain the main focal point of how we treat patients with moderate-to-severe disease activity.

What’s new with TNF inhibitors? One very important consideration is that of biosimilars. There is a biosimilar infliximab that is widely used in Europe. It was studied in RA and a small study was also conducted in ankylosing spondylitis; however, its approval was across the board for all of infliximab’s indications. An etanercept biosimilar that was studied in psoriasis was just approved in Korea for all six etanercept indications.

What about remission? Can we taper or discontinue therapy? According to Dr Kavanaugh, the short answer is that we really don’t know. Studies in PsA have shown that the possibility of reaching a drug-free remission is low and discontinuation of DMARD therapy is not recommended. (Araujo E G et al. Ann Rheum Dis. doi:10.1136/annrheumdis-2013-204229) An observational cohort study of the PsA patients in the CORRONA registry also looked at stopping TNFi therapy and the data can be interpreted a number of different ways. There were some patients who were able to stop therapy and still do well and others flared around or just before two years after stopping therapy. The challenge is identifying the patients who will do well. There are dozens of studies in RA that are looking at this issue. The trouble is, we cannot compare from study to study because there are so many different variables to consider such as the tapering plan, the “target” for remission, duration, prior/concomitant therapy, disease activity, definitions of failure, length of follow-up, efficacy of retreatment, sequelae of flares, predictors of response, study design, motivation, and specific biologic target/agent. (Yoshida K, et al. Ann Rheum Dis 2014;73:e5; Kavanaugh A, Smolen JS. Clin Exp Rheumatol 2013;31(Suppl.78): S19–S21)

What about other pathways? Even though we’re doing much better than we were in years past, there is still an unmet need until we can cure everyone.

What about patients who have been on the TNF inhibitors? Those patients can be more difficult, but they’re the ones who we really want to know about as we typically utilize TNF inhibitors first. As we have previously seen with the ustekinumab data and other RA studies, the people who are naïve to TNF inhibitors did better overall than those who had previously been on TNF agents; but, the responses were still good.

IL-17 also has a positive impact on joint damage, in that it inhibits radiographic progression with treatment. This is very impressive data as these studies are becoming harder and harder to conduct for ethical reasons.

In the FUTURE 2 study, there was no IV loading dose; they studied secukinumab subcutaneously only. When looking at the positive ACR responses at week 24, we can see very little difference between secukinumab 300 mg versus 150 mg.

Ustekinumab, an IL-12/23 inhibitor, was approved in September 2013 for the treatment of PsA. In addition to demonstrating clinical efficacy, ustekinumab has also shown the ability to stop X-ray progression. (Kavanaugh, A et al. Ann Rheum Dis. 2014 (Epub 2014 19 Feb)

We’re now learning many different facets of disease and Dr Kavanaugh believes that we will begin discussing responses to these different targets more than we ever have before. Interestingly, IL-17A appeared to have no clinical efficacy in RA and may have even worsened the crohn’s disease.

The two-year data for Apremilast, which will be presented at EULAR in June 2015, shows that 86% of the patients stayed on drug and about 20% achieved an ACR 70 response.

The earlier data for apremilast, while not quite as robust as that of the TNF inhibitors, still shows good clinical ACR response rates. 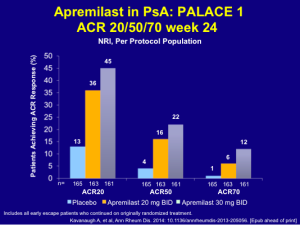 Among patients receiving apremilast 20 mg BID and 30 mg BID, 34% and 51%, respectively, achieved a PASI 50 and 18% and 21%, respectively, achieved a PASI 75. Some patients do very well with this drug. The safety and tolerability issues with apremilast are very important for patients, as most adverse events are either mild or moderate and there is no need for laboratory monitoring.

In conclusion, Dr Kavanaugh feels that the future of PsA is very bright. We have lots of therapies on the horizon. GRAPPA is currently in the process of updating the PsA guidelines so as to incorporate some of the newer data.

Out of the Box: Clinical Pearls for Acne and Rosacea Psoriasis Update: Current Therapies
Scroll to top
Loading...