An 11 year-old boy presents to your office with his parents for the evaluation of a pigmented band on the right thumb. What would you do next? 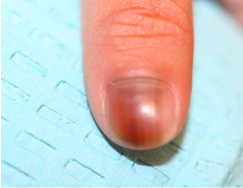 Melanonychia is not rare; however, nail melanoma in children is rare. The pre-test probability of a benign outcome is high. Most of the time we can photograph and follow the patient over time. In an unscientific perusal of cases at UCSF, Dr Frieden found that the majority of the patients were of Asian descent. Occasionally, a biopsy is performed. In a 20-year cohort, there were no melanoma deaths in childhood from nail melanoma.

Special Sites and Concepts of “Mino”

Special sites, such as the nail, scalp, oral and genitalia, require careful scrutiny and some pathologists appear to have a better handle regarding the appearance of melanocytic lesions. The usual rules, both clinically and pathologically, often times do not apply. Definite cases of nail melanoma in childhood have been reported and there have been issues in the pathology of nail melanocytic biopsies. Richert and colleagues conducted a retrospective cohort of 30 biopsied lesions in Belgium. Seven out of the 30 patients were age 20 or younger and none of them had melanoma. (Richert B, et al. J Am Acad Dermatol. 2013;69(1):96-140.) A 2008 review article reported two cases of nail melanoma in children with skin type 3 and 4 in a 14 year-old and a 6 year-old. Both were diagnosed with having melanoma in situ (MIS) with onset of melanonychia less than one year of age. There were eight other reported cases in the literature with six diagnosed as MIS. Two had lymph node disease and neither presented as melanonychia. (Iorrizzo et al. Dermatol Surg. 2008;34:974-8)

“Struck by lightening versus severe bike accident?” Dr Frieden thinks about nail melanoma in terms of risk assessment. In general, we would not worry about being struck by lightening. It doesn’t mean it doesn’t happen, but it is extraordinarily rare.