At MauiDerm 2014, Dr Webster lead off the discussion by reviewing some of the hot papers in acne in 2013 that help with either the understanding of acne or the treating of it. The first paper, published in JAMA Derm, discusses high dose isotretinoin and whether or not it is safe and effective. Traditionally, data demonstrated that the 120 mg/kg dose has a 20% relapse rate, this is based upon youth, severity, diet, and hormones. We have learned that if someone has really bad acne as a child, they will most likely have a relapse later and likewise, patients who had really severe acne on isotretinoin will likely relapse. A paper published in the International Journal of Dermatology in 2012 demonstrated that isotretinoin 290 mg/kg had a 12 percent relapse rate over three years; of note, adverse events were not any worse. Another retrospective paper, published in JAMA Derm in 2013, showed that isotretinoin greater than 220 mg/kg had a relapse of 27 percent versus 48 percent in doses less than 220 mg/kg—so the really high dose had a lower rate, but it was still somewhat high. Those who received the higher dose did have increased dermatitis.  Another finding from the study was that those on the higher dose of isotretinoin were aching a lot longer even when the isotretinoin was over; this is something that we don’t see with the standard dosing. As dermatologists, we have to consider that there may be a difference in how we define relapse and prospective head-to-head studies need to be done.

Figure 1 depicts the absorption rates with Accutane 40mg “fed” versus “fasted” and you can see that there is a significant difference. 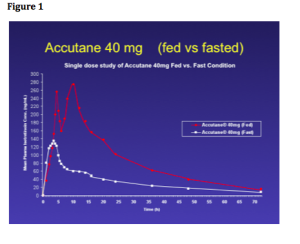 With the new product, isotretinoin-lidose, you can see that the absorption rate in Accutante (fasted) is exactly the same; however, the newer form of isotretinoin (fasted) is much higher. This drug may be helpful for compliance-challenged patients. (See Figure 2) 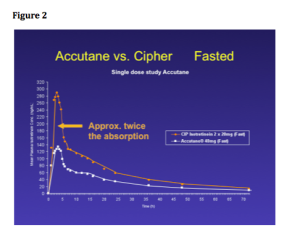 What about P. acnes?

Recently, there have been a couple of papers that have been published suggesting that there may be a particularly hot strain of P. acnes that is causing acne. Years ago, one of Dr Webster’s first papers was looking at all of the strains of P. acnes with a bacteriophage typing system and they found that there were many strains of P. acnes that were reproducibly different, but there was no difference in where they showed up, i.e., the same spread of strains whether it was inflammatory or non-inflammatory acne or whether it was isolated from CNS surgery or from hip infections.

How do you explain this and does it make sense? Does it mean that people with bad acne need to have their P. acnes replaced with a non-verulent strain so that they don’t get pimples? Or is this an ecological issue? The skin microbiome is a microecology in the same way that a swamp has its own ecology. Different selective pressures do different things to the microenvironment. For example, if you sample the forehead, it is very rich in P. acnes and malassezia. If you sample the forearm, there are usually no sebaceous glands and there is no food for P. acnes so you don’t get a lot of growth from P. acnes. This tells us that big variations in environments lead to big variations in strains.

Dr Webster suspects that this difference in P. acnes distribution between acne and non-acne is not necessarily “bad strain” versus “good strain”, it’s that inflammation is a selective pressure just like the presence or absence of food/water in an ecosystem; this adds oxidative stress on the bacteria. Remember that P. acnes defends itself against oxidation pretty well even though it is an anaerobe. Dr Webster feels that the enrichment of type 1a strains in patients with inflammatory acne is merely showing that inflammation selects through strains that can survive better in a more oxidized environment.  As dermatologists, we really need to look at how strain 1a is different from strain 1b—does it defend itself better against oxidation?